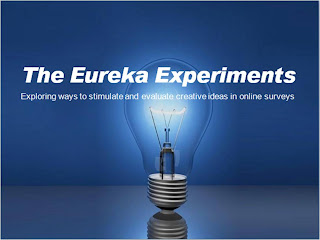 We recently conducted a series of experiments looking at how best to stimulate creative thinking within an online survey environment.  Co-creation is a hot topic out there and moderated think tanking is a well established art.  But within the online survey environment it is a very difficult task to get people to think and act creatively, most rely on co-opting large numbers or profiling groups of creative people to come up with ideas.  We wanted to look at how you could stimulate creativity amongst small groups of regular joe respondents and try and develop some practical technique that our clients could use as part of their every day research.

This is a short report on these research experiments.

The starting point for this research was to explore all the idea generation techniques out there and to see how they could be adapted to work in an unmoderated survey environment.

Now there are a lot of techniques that have been publish, not least by Edward De Bono who has pioneered much of the thinking on this topic.  There are some truely wonderful and inspiring books and papers published about lateral thinking and idea generation.

I cannot confess to have read it all, it is a huge subject and I must admit to feeling a bit like a man in a rowing boat responding to an SOS call and approaching the topic fining out it as an oil tanker!

If I had to put all this thinking into a nut shell, most idea generation techniques seem to rely on idea generating enzymes that trigger creative thought. 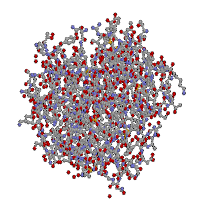 A way you can think about this is that if you ask someone in a survey to list all the things they can think of that they may find in a  fridge, people get stuck after they have thought of about 8 items.  But if you ask them to think up items in a fridge that might have a sell by date and go off quickly, or white items or small items, each of these in tern can deliver more responses and by rolling respondents through this prompting process you can get respondents to easily build up list of 20, 30 items quite easily.   This refinement of the thinking to focus on a specific view point switches off the frontal cortex which can over dominate decision making and allow access to more free form parts of the brain (apparently!).


What items do you find in a fridge? 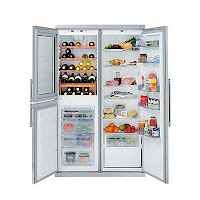 Well the same trick applies to coming up with ideas, if you ask people straight to come up with an idea most people come up blank, only about 2% of people can do this spontaneously without much effort. For the rest of us we need something to help trigger ideas and there are hundreds of ways you can do this.  Edward de Bono espouses using completely random stimulus  say for example if you had to think of a name for a new brand of yoghurt you throw in the word "super hero" and see what ideas this trigger, so people might come up with "captain yum" youth yoghurt brand. There are whole books written on different seeding processes.

The difficulties of applying idea seeding techniques to an online survey

To use these techniques within a moderated research environment is quite easy to moderator effectively acts as the enzyme to ideas and can toss out different seed throughts to stimulate peoples imagination.  But in online research it is a more linear process you have to work out ways of seeding people effectively without a moderator, a moderator can play around with different techniques until he hit upon something that works, with online research you have to plan what you are going to do, it requires a lot more up front creative thinking.  There are technical hurdles too, to work out how to randomly deliver seed idea effectively for example.  There is also an important emotional engagement issue as well.  In a focus group you can warm people up before you start the task.  If you throw people in cold to a creative idea generation process you are likely to get little out of them, you need to work on their mindset first. How do you do that in an online survey?

The warm up process

The starting point for these experiments we conducted was to think up some warm up technique to get online respondents in the mood to give you ideas and this basically involved playing some games.  I spoke friend of mine who run the Islington Youth Theatre and specialises in improvisation and he helped us come up with some ideas.

The trick is he said to try and get people to do something stupid!  Once you have encouraged that you have a more open mind! and they are blooded in to the process.

Well we thought to get them to be stupid we have to do something stupid ourselves!!!

We devised this game, which is straight out of lateral thinking school  called  "Stupid uses"  Where we asked respondents to try and think up some stupid uses for different products.  But to see this process we spent an afternoon in the office playing this game ourselves and photographed the experience and added these photos to the survey to lead the way....(I can honestly say I have not laughed quite so much in years doing this) 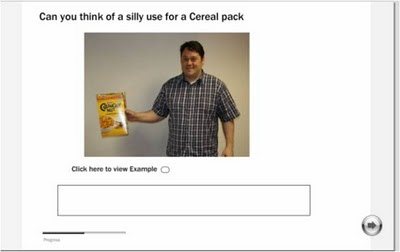 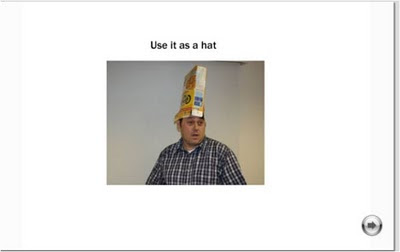 The impact of this technique was fantastic.  We did a test and control experiment, half were asked to come up with some ideas without this promoting and half with it and did a simple audit of the quality of the idea see the result below a measurable improvement in creativity was achieved. 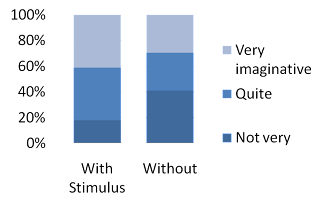 We have experiment with some other warm up process that have also been effective. Notably a technique you could use to encourage people to write straplines for product where first you ask people to summarise films in as few a number of words as possible.  We ran this as a competition at the start of one survey and got them to pick out the ones they liked best and it really did work a treat at getting them engaged.

Idea for an idea

The idea for this technique came from a game I play with my kids travelling in a car.  You ask them to think up uses for things competitively.    If I were to ask my son to list as many uses as he can for a brick which I did as a test once, he got bored and gave up after about 10 ideas,  you then play this as a game in the car on a long journey trying to think up alternative uses for say a box of matches, he comes up with an idea then I do and the loser is the ones that gives up first - well can play it for well over an hour and come up with 100+ ideas.

So we tried to reproduce this process in an online survey. We asked people to think up ideas for something and when they run out of ideas, we show them an idea someone else has had and see if it prompts them to have another idea.  We do this over an over again until the respondent gets bored doing it.  We get them also to vote as the go along on the ideas other people have and say if it is an idea they have had already, which gives us a way of quantifying the quality of the ideas.

We build a special question widget to do this that recycles ideas from other people back into the survey. 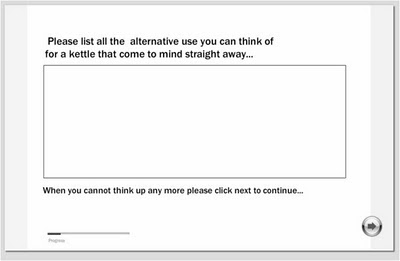 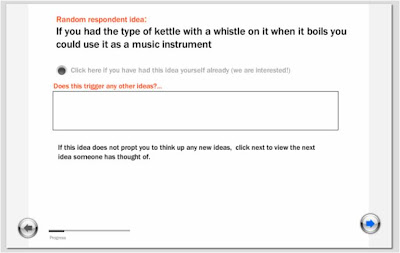 What you end up with is an idea generating engine that in test experiments can increase both the volume and quality of ideas,  from around 7 ideas per respondent to 18.

This next technique requires more up front creative work but is effective.  You allow people to visit a series of different room, give them total freedom to explore which ever room they like and in each room there is a different piece of random stimulation or perspective on the problem or issue designed to trigger some creative thought.   What you have to do is come up with as many seed ideas as you can to put in each rooms (an exercise in itself in many respects.)  The more random and creative you can been in how you design this the better.  we do have some tricks up our sleeve to do this that I would probably describe as proprietorial so cannot reveal them here but the idea is very simple and very effective. 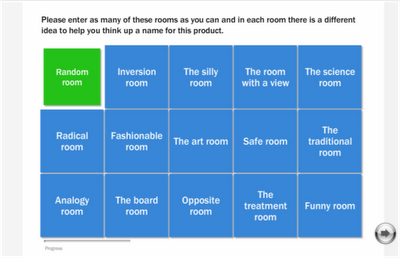 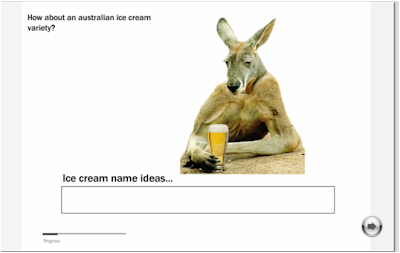 We ran an experiment using this technique getting people to think up ideas for New Ben and Jerry's ice cream flavours and cold they come up with 0.7 but through this process each person came up with nearly 7 ideas.

Through the minds of 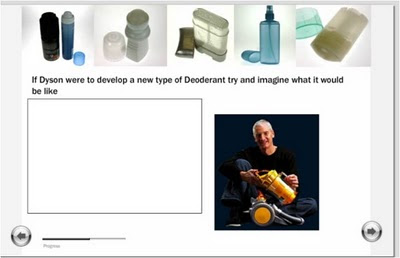 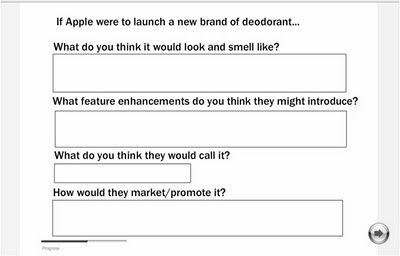 In experiments we have conducted this can trigger an order of magnitude improvement in the number of thoughts and ideas people come up with.

Summary of what we learnt from these experiments

Good ideas in, good ideas out...we did a bit of follow up research to measure the quality of the stimulus ideas and evaluate the number of ideas each ones generated.  You can see here that the best ideas generated a lot more ideas themselves... 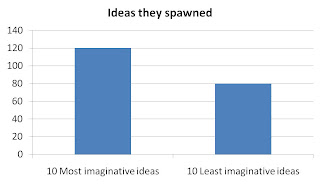