England are going to win the World Cup in 2018: A Market Researchers prediction!

This is an blog post I first published after the 2014 world cup, that I am republishing to herald our expected victory next year! 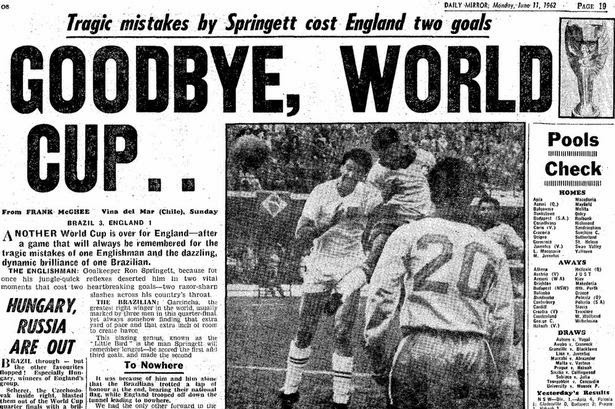 IN 2014 England got dumped out in the first round of the World Cup and everyone in our country was disappointed, an emotion we are quite used to feeling. After every world cup failure begins a round of postmortems that we all probably secretly enjoy as much as the competition itself, working out who to blame for the team’s failure.  In past World Cups this has been quite easy: for example David Beckham kicking a player and getting sent off, having a turnip head as a manager or a lack of goal line technology.  But in 2014 it was a little difficult to work out who was to blame. I read a lot of overfit analysis, none of which is particularly convincing because, well, in the scheme of things the sparky young team played quite well. It seems like we were just a bit unlucky last time round.

The role of randomness

Its quite hard to accept the role that randomness plays in the outcome of world cup matches.  Every nation when they get kicked out or fail to even qualify probably believes their teams were "unlucky" and that their teams are better than they actually are.  So what is the relative importance of  luck v skill when it come to winning the world cup?

Unlike the premiership where there are 38 games over which time the performance of the teams is largely correlated to the quality of the squads (take a read of the Number Game* by Chris Anderson and David Sally)  performance of a world cup squad cannot be calculated by the aggregated skill value of the squad there is a lot more randomness involved.  Imagine if the premiership only lasted 3 games: in two out of the last four seasons the team that won the premiership might have been relegated.

*a must read if you are a market researcher and like football!

There is another factor too, in the premiership the best players get sucked up into the best teams hence the much higher win ratios between the top and bottom performing sides compared to the world cup where the best players are distributed more randomly and is proportional to the size of each footballing nation.  This in tern makes the outcome of international matches even more random.

Who influences the outcome of a match?

If you look at who has goal scoring influence across a team you will notice that the negative effects of causing goals a pretty well distributed across a team but the positive effects of scoring goals are a lot more clustered among some individuals. See chart below showing statistics from an imaginary team based on typical performance data taken from the premier league. 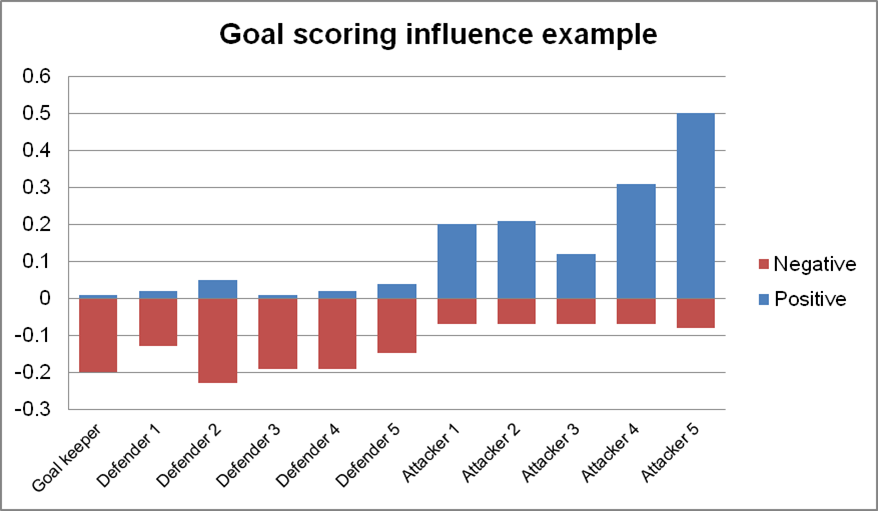 The potential performance of a world cup team must be measured not by the overall skill value of the team but the value of a smaller network of attacking based players who can make the most game changing contributions. In the case of players like Lionel Messi a single player can carry the whole goal scoring burden of a squad.  It only takes one or two randomly allocated star players in a world cup team to elevate its performance chances (think of Pele or Maradonna).

The performance of defence is more a case of luck. You might have one or two unreliable defenders who you may not want in your premier league squad because you know over the course of a season they may cost you a match or two, but at the individual game level and a world cup is based on the outcome of  three or four key individual games, the chances are a poor defender might well run their luck.   The other two important factors defenders have to contend with are the extra stress and lack of team playing experience of a world cup team compared to a premiership squad.  Without doubt stress plays a big part, players are really hyped up and there is probably an order of magnitude increase in tension which is the root cause of many errors in world cup matches. If you look at the defensive mistakes that cost us goals in recent world cups some of the biggest mistakes were caused by effectively our most reliable players, John Terry and Steven Gerrard and Phil Neville.  There is also a lack of formation practice to contend which is particularly critical for defence. How many hours of playing together does it take for a defence to gel? Most world cup squads have days rather than months to prepare.

A team like England might well have a higher aggregated skill performance average compared to other teams, but this does not result in the same reliable performance ratios that you see in the premiership. This is because over half the value is based on their defensive skill which can be completely undermined by bad luck and we don’t have a cluster of super-skilled players to elevate the team out of bad luck matches by scoring more goals than we let in.

The influence of the Ref

To win world cup matches you are much more reliant on the manager’s structural approach, the contributions from clusters of individuals who might form good attacking combinations and one other person – the REF!  Or rather, the ref in conjunction with the crowd and the linesmen.

If you analyse a typical game you will find that the number of major goal scoring decisions that are in the hands of the referee and linesmen are actually enormous compared to any individual player. It’s difficult to put a figure on it but let’s say on average there are about 6 decisions that could have affected a goal one way or another by the referee* its instantly obvious the relative influence they have on a match.

*That is a wisdom of the crowd estimate by asking a collection of football fans how many goal-affecting decisions are made in the match by the referee and linesmen, six was the median average estimate.

Now in nine times out of ten these decisions balance themselves out but refs are only human and so it’s no wonder why there is such a big home team advantage – with 50,000 fans screaming penalty it must be extremely difficult for refs not to be influenced by the crowd.  In fact you can almost put a figure on the influence of the crowd by comparing home and away goal scoring averages the home side gains an average 0.35 of a goal per game net advantage if you examine premiership games,  which can only be really down to the net contribution of the crowd/ref decision effects.

It’s no wonder as a result that there is such a disproportionate home nation advantage.  Effectively every home nation team is starting with a 0.35 goal lead, this advantage aggregated up over the course of a tournament  has means that nearly 30% of all world cups have been won by the home nation that is 10 times higher than chance.

Am I likely to ever see England win another world cup in my lifetime?

Is probably a question most England fans ask themselves. What does it take to win a world cup – how good do you have to be to override luck?  We have taken a look at this and run some calculations.

The chart below take a little explaining but it maps out a team’s skill level v the number of times it’s likely to win a world cup over the course of someone’s average football supporter’s lifetime of 72 years = 18 world cups.  If there are 32 teams in a word cup and you are an average team and your team qualifies for every world cup final the chances are you will win 1.1 world cups over your lifetime. If in you are England and only qualify roughly 80% of the time the changes will drop to 0.96.  If your team is twice as good as average, you are likely to win roughly 2 world cups and 4 times better 6 world cups. 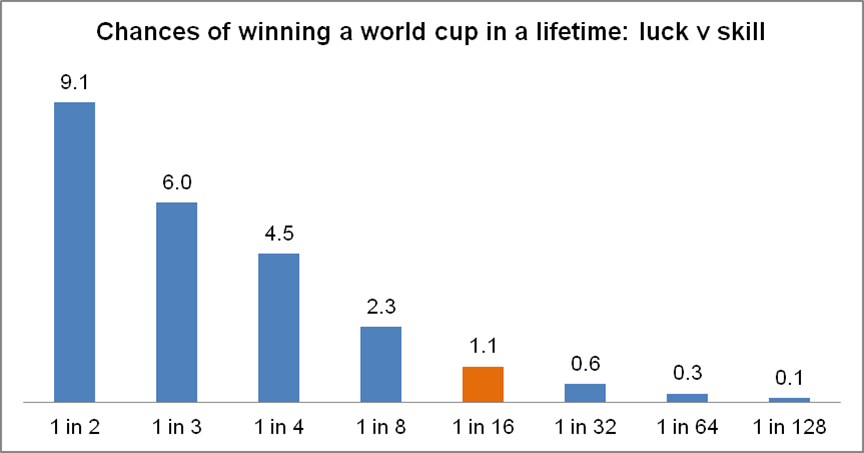 Well essentially yes, if you look at the average game-win ratios of all the teams that have played the most regularly in World Cups v the number of World Cups they have won its pretty closely correlated at 0.91.    Germany has a three times higher win ratio than us and Brazil four times higher.

Now I appreciate there is some self-selection involved here – this chart should really be based on first round matches only for a totally fair comparison, but we don’t have that data. I think it’s reasonable to say though that England has not really been done out of its fair share of World Cups.  I think we have won as many as our teams aggregated performance deserves.  You might argue that some teams have been luckier than most: Italy certainly and others unlucky, Mexico should have won it twice by
now based on their aggregated performance.

A victory every 50 years


Doing the maths, based on England average win ratio, we should win a world cup roughly once every 50 years.  Now as England last won the world cup in 1966 so in 2018 it will be 52 years since we won, I think that mean we are now officially due a victory this time round does it not?